Barbados is one of my favourite places on the planet. Not only does it have some of the most beautiful beaches in the world, it has a real authentic Caribbean culture, an interesting colonial history, some of the regions friendliest people and amazing restaurants. But best of all, this paradise island of Barbados has some of the world’s best and most luxurious vacation rentals and is one of the easiest islands to get to with direct flights from most major US and Canadian cities as well many mainland European hubs. But these are things you probably already knew about Barbados.  So here are some surprising yet interesting fun things you may not know!

1) Barbados was the only holiday destination in the world to be privileged enough to have a scheduled flight with Concord. Concord stopped flying to the island in 2003 when it was decommissioned, but there is an incredibly interesting concord museum located beside the island's main international airport – Grantley Adams. During the years Concord flew, it made more than 7000 flights to Barbados and carried lots of famous people including Elton John, Prince Albert of Monaco, Mick Jagger and Pierce Brosnan!

2) Tiger Woods got married on this beautiful island in 2004. He organized thousands of red roses to adorn the aisle and had lots of celebrity guests including Michael Jordan and Charles Barkely.

3) Barbados not only produces the world's oldest rum, but it also produces one of the best. Mount Gay Rum dates back to 1703 and today is sold in over 110 countries worldwide. The distillery is definitely worth a visit if you are on the island.

4) The name Barbados was chosen by a Portuguese explorer called Pedro a Campos. He liked the islands fig trees which have a beard like appearance and hence named the island "Los Barbados" which means The Bearded One!

5) The last time a hurricane made landfall in Barbados was over 40 years ago making it one of the best islands in the Caribbean to visit in the off-season.

6) Barbados never closes or shuts down. The hotels and restaurants stay open all year around!

7) Barbados was a British Colony for over 300 years and only gained its independence in 1966. Consequently, there is still a strong British influence on the island. For example, they drive on the left side of the road, many people have British names, there is a lot of British architecture, and they even have place names like Cambridge, Windsor and Buckingham Hill!

8) Despite its independence, Barbados still has ties to the British Monarch and is represented by a British Governor General.

9) Cricket is the country's national sport, and local Bajans are obsessed. In fact, for such a tiny Island, Barbados has produced some of the world's greatest cricketing legends. Barbados's most famous cricket grounds are called the Kensington Oval.

10) Barbados is quite hilly for such a small island with its highest point at 1,100 feet above sea level.

11) Barbados has over 3000 hours of sunshine each year. The hottest month recorded was in April and the coolest in January. The wettest month is November, but even then, the sun is always just around the corner.

12) Many celebrities have a love affair with Barbados. Simon Cowell comes every year, and of course, Rihanna was born there, but you will see many familiar faces strolling along the beautiful beaches such as Gwyneth Paltrow, Wayne Rooney, Cara Delavigne and of course many members of the Royal family have been spotted playing polo! 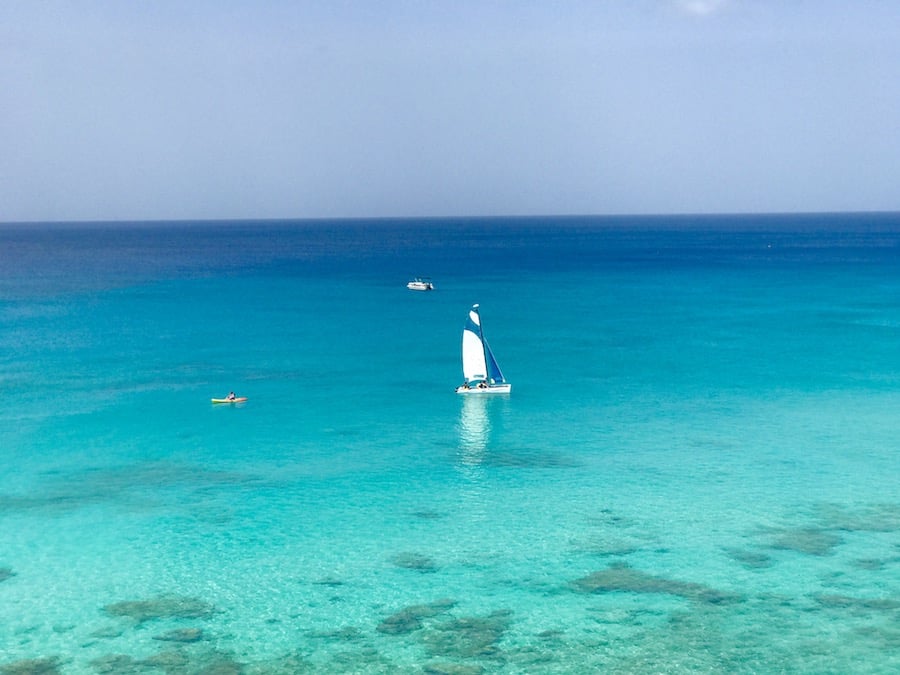 14) There are a whopping 1500 rum shops located all over the island. So, if you are a rum lover, this is the place to come!!

15) Barbados has some of the loveliest and most luxurious villas and vacation rentals in the world. Take a look at Greensleeves for an example of where the rich and famous stay!

16) In direct contrast to fact 15, Barbados, before it was settled, was almost entirely covered in rainforest and its main occupants were thousands of wild pigs!

17) Bajan dancing is pretty sexy! Locals call it rockin up and tushing back! You need to use your imagination for this one but if you want to experience it, go to the Crop Over Festival in July and August each year.

18) Barbados is a tiny 166.4 square miles in size with a population of 285,000 people. It is possible to drive around the whole circumference of the island in about 3 hours.

19) There are some incredible beach and oceanfront restaurants on the island. Some of the best include The Cliff, Tides, The Fish Pot and The Lone Star.

20) All over Barbados, you will come across mischievous little monkeys. You will even see them in your villa gardens! They originally came from Senegal and Gambia and are green in colour.

21) Barbados was a huge sugar producer, and at one point there were 491 active sugar plantations. Many of the plantations house are now museums on the island. One of the most popular ones is St Nicholas Abbey.